Finally finished the project I started back in January but lost motivation for, due to the long dreary cold winter, until after the hottest and longest summer in memory in Sweden…! I needed to finish it so I could at least wear it once this year.

Last summer I was obsessed with owning a floral stripe shirtdress. There was a dress at Zara which might have fit the bill, except that based on the model’s height, it would definitely be too long on me. On top of that it was in viscose/rayon, and meanwhile I spotted a cotton lawn fabric (a bit of a splurge at 10 GBP/meter) on Minerva Crafts which would be much nicer! I could only buy the fabric by the meter, so I hoped 2 meters of the narrow 140cm/56″ fabric would work by hacking a shirt pattern. 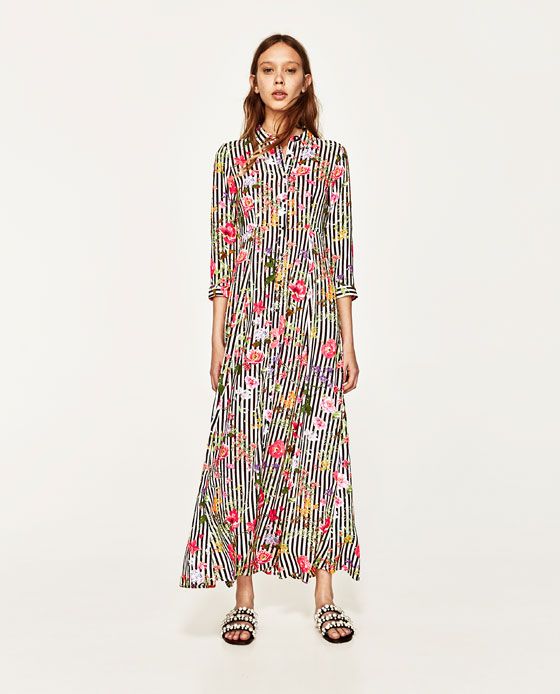 I used McCall’s 6436, my 3rd shirt dress pattern. Previously I attempted a Papercut peter pan dress shirt, an unfinished UFO since I realised just before doing the buttons that the the quilting fabric probably wasn’t very wearable, as well as Butterick B5526 which I was not crazy about due to the size of the collar.

Based on what I read from other reviews of this pattern, I made a muslin, or attempted to make a wearable muslin in a poly cotton navy pinstripe fabric which I bought in the discount bin at my local fabric store. I ended up removing the sleeves, since the fabric was a tad stiff for this shirt style, and ended up being a bit too much STRIPES IN YOUR FACE. In the end, I never finished the shirt since I didn’t have any summer bottoms that went with a navy sleeveless shirt. A pair of white jeans would have looked amazing with it, but my summer wardrobe is seriously limited. Living in Sweden where summer is like a week long, it never made sense to invest in a summer wardrobe. Until this year. If only I had finished the shirtdress earlier I would have been living in it 😦

So anyway, after finishing the muslin, I felt confident enough to dive into hacking the pattern into a shirtdress!… Well, if only I knew what I was in for… The number of design changes, fitting changes, and incorporating new methods that were not in the sewing pattern – well, I really didn’t make things easy for myself! (Read on for my full Sewing Pattern Review of what I changed) Though, the silver lining that I sewed my first sleeve placket! (well, actually, attempted it, ripped it out, practiced on a scrap, and then tried again). Thanks to the fabric, which was so easy to work with! I’m really seeing the benefits of working with higher quality fabric.

Though the pattern is a loose fitting blouse, I just can’t help myself from taking in patterns towards a more fitted silhouette. One of the frustrations I’ve had with buying RTW and with my early sewing projects is that everything is ill-fitting on me, making me look terrible. Parallel to my sewing projects during the past year, I’ve been trying to incorporate the principles from Fit for Real People, and just started fitting a Palmer Pletsch sheath dress learning pattern.

I’ve also learned a lot from my favourite Youtuber, Aly Art, about dressing according to Kibbe body types about what styles and silhouettes look best on me. I’ve often been confused/skeptical about dressing for body type, since it’s unclear whether I’m a pear, rectangle, inverted triangle – none of the traditional advice really seemed to apply to or be helpful for me… Well, according to the Kibbe body types, I’m a Gamine (more specifically, Soft Gamine), best described as looking a bit “teenager-ish”. Yin or rounded in the face, and Yang / angular in the body.

More tips on Gamine dressing (basically a reminder for myself!)

Applying these principles on myself, I can see that tailored > loose. These photos are taken days apart (the pencil skirt and tie neck blouse I blogged about last time). Though I know the principles in theory, application of the knowledge takes a bit longer (and maybe I need to either stop wearing the blouse or try to redo it). 😦

Now, this advice has really clicked for me, since basically for the past decade, oversized, minimalistic, loose, boxy shapes have really been “in”, especially in Scandinavia. And I have never felt good in these types of garments (while simultaneously wondering how everyone else manages to pull it off). I feel much more at peace knowing, confirming and accepting that, really, I should be wearing tailored shapes with waist definition to look my best. Though this makes my sewing tasks harder, at least I have the power to create the garments that look best on me, irregardless of what is “in” at the moment or not. And that is amazing 🙂

Finally, thanks for bearing with me for the photos! I was super proud on finishing the dress, but after taking photos, I’m a bit unhappier seeing the finished product on. The interfacing on the placket is rather bulky and interferes with the dress falling smoothly! Any advice for softening up the interfacing? My local store doesn’t sell thinner interfacing, so I’m not sure when to skip interfacing or not on my next project(s).

As well, I haven’t yet installed the cuff buttons. Advice about what to select? I used some cheap bulk buttons I picked up on a trip to New York, but I don’t think that I’m very fond of it (see my close up photo of the buttons on the placket). Also appreciate advice on my next version of this shirt. The buttons seem a bit too big?! (not sure if I’m just used to RTW, but my other dress shirts have much smaller buttons)

The shirtdress is my 4th attempt at making a dress shirt as a beginner (previously tried a Papercut peter pan dress shirt, also Butterick B5526 which I was not crazy about, and now this, a 3rd pattern). I think I finally found a pattern to continue building on for future.

I attempted to make a wearable muslin in a mystery fabric (navy pinstripe poly cotton most likely). The fabric was surprisingly nice, though probably better suited for a loose, drapey summer trouser than a shirt (still learning about fabric since I’m a beginner), so I ended up removing the sleeves since they were a tad too stiff.

Pattern Sizing:
Big 4 is known for having a lot of ease, so I sized down 1 size (size 8, grading out to size 10 in hips) and made fit adjustments thereafter.
This pattern comes in different cup sizes A/B, C and D, and I used A/B.

Did it look like the photo/drawing on the pattern envelope once you were done sewing with it?
I think so. The cover photo shows a lot of ease in the pattern, though I took in the darts considerably and reduced the sleeve cap.

Were the instructions easy to follow?
Yes, aside from challenges due to my own modifications to the pattern and methods. I think if I had actually followed the instructions I would have made my life easier, but then I would not have got the result I wanted.

What did you particularly like or dislike about the pattern?
The high armholes are very flattering!

The cup sizes still seemed to be too large for me, although it may have to do with learning how to select and grade my proper size due to my body type (broad shoulders, narrow back and chest). Generally RTW that fits me in the shoulder is also too large in the body.

Pattern alterations or any design changes you made:
Oh boy! Quite a lot!

Design changes:
– Extended the length into a shirtdress. This was a great way to squeeze a shirtdress out of 56″/140cm wide fabric that I fell in love with, which I could only buy by the meter online (2m used)
– I reduced the sleeve cap height / shoulder ease (approx 1/2″ ease reduction) using Silhouette Patterns Peggy Sagers’ method on Youtube

– narrowed the sleeve width, using a RTW dress shirt I already own as a reference
– shortened the collar stand (forgot to shorten the collar height…)
– hidden shirt placket

Construction notes:
– 3/8″ seam allowance for armholes, 1″ seam allowance on cuffs to be able to skip over the step of trimming after sewing
– French seamed sleeves, so that they will look neat when I roll up sleeves

Fitting changes:
– shortened sleeves by several cm, and then shortened them another 1cm again between the muslin and shirt dress which ended up being a tad too short…
– quite a long, deep back dart, to try to compensate for my erect back and sway back. I learned during the process that I probably need a narrow back adjustment instead, since I thought I only had a sway back and erect back.
– lowered/deepened the neck scoop
– shortened bust dart, lowered by 1.5 cm
– added waist darts for additional shaping

Would you sew it again? Would you recommend it to others?
It was quite a task learning to sew and fit a dress shirt, as well as make changes to the pattern and methods simultaneously, but I will definitely make this again, taking away all I have learned!

I recommend reducing the shoulder ease / cap height if you want to get a nice streamlined fit on the shoulders as I did.

Started my serious obsession with sewing August 2016. Read more about why I started sewing here: https://swedishseams.wordpress.com/2016/10/04/why-i-started-sewing/ View all posts by Swedishseams

Exploring the world of couture sewing

Sewing on the Edge with Barbara Emodi

A Plus Size Sewing Community

sewing my own clothes

You Can't Stitch With Us
Step Into The Silver Rain

-behind every cloud there is a silver rain-